It is reported that there are 10,000 motorists have been caught twice for being distracted whilst driving a motor vehicle on UK Roads over the last 4 years.

Many such incidents go without tragic results such as:

However using mobiles phones behind the wheel are distracting to the extent they are akin to a drink driving charge.  Of almost 240,000 motorists that have been caught since 2012, only 284 have received a ban. 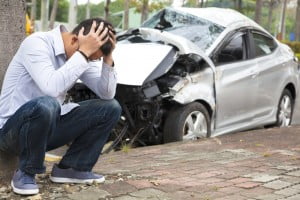 Put Your Mobile Phone Away In Your Car

To prevent you being distracted but your mobile phone away so that you cannot get access to it such as your glove box.  One tragic loss of concentration can result in a fatal road traffic accident.  You could kill somebody.  It is not worth it.

Police Will Check Your Phone

As is routine in any serious accidents the police will check your mobile phone records to see if you were using your phone immediately prior to a any accident including a fatal accident claim.  If there is not a great deal of evidence as to the cause of the accident, if you were using your mobile phone it may be suggestive that you will be at fault and you could be charged with causing death by dangerous driving or causing death by careless driving the former can lead to a prison sentence of up to 14 years.

The fact that your own life could be spent behind bars for a long time, you also have the guilt of having to live with yourself for killing someone on the road.  Just to check your texts or emails.  It is not worth it.