Wrongful Death Compensation in the UK 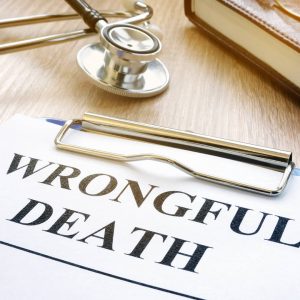 We are specialist solicitors in wrongful death compensation in the UK. Find out more about making a wrongful claim and the awards available to you.

In their report, the Law Commission has looked into reforming the Fatal Accidents Act 1976: Claims for Wrongful Death (1997) Consultation Paper. The harsh unfairness of the 1976 Act is mirrored under the Criminal Injuries Compensation Scheme and has been criticised by the Criminal Injuries Compensation review. The conclusion was that more family members should be entitled to claim, and compensation for wrongful deaths should be increased.

Nevertheless, remember that as solicitors specialising in making wrongful death claims, you can claim many other heads of damages and awards. Please get in touch with us for further information.

The Law Commission recommended that a bereavement award should be extended to:

But even here, the compensation for a bereavement award is still too low. The Law Commission reconcile that there is a misconception of the purpose of bereavement awards, that his people think that it is the value of what society places on life. That is not the purpose. If not, then what is the purpose of it? The law is and should be justice. There is no justice, and bereaved families across England and Wales are sadly being forced into financial difficulty and unnecessary stress when they need help at most in life.

Wrongful death is defined as a legal claim that can be pursued following a person’s death due to someone else’s wrongful actions. A lot of cases are brought due to negligence, such as dangerous driving or medical malpractice. Murder with intent can also lead to a claim, but as wrongful death is a civil claim, the burden of proof differs when compared to criminal proceedings. In the UK, the burden of proof is based on the balance of probabilities.

To help you learn more about what constitutes wrongful death and how much compensation can be awarded, this section will look at some real-life examples as reported by news outlets.

In 2012, Lex Warner sadly died after diving off Cape Wrath in Scotland. Hours before performing a technical dive, he suffered an abdominal injury in a fall while wearing heavy equipment and fins. While in the water, Mr Warner encountered issues as a result of his injuries and he became unresponsive before being lifted to the surface.

After a lengthy legal battle, Mr Warner’s nine-year-old son has been awarded a £290,000 payout. The judge ruled at Edinburgh’s Court of Session that the boat’s captain failed to take enough action to minimise risks. In particular, the judge acknowledged that the captain failed to recognise that arrangements “permitted or even encouraged” divers to walk on the deck while wearing fins. This “risky activity” is believed to have led to Mr Warner’s death when he began to struggle during the dive.

Compensation Rates Wrongful Death Awards in Scotland Who Cannot Claim? Who Is Entitled? Petition to Increase the Award Bereavement and Criminal Injuries Compensation