Are you looking for information on making an asbestos compensation claim? Then you’ve come to the right place. As experienced solicitors, we know all there is to know about this area of law.

Our 2021 guide for victims of asbestos after death and other asbestos-related conditions explains the key details. If you have lost a loved one following asbestos exposure at work, we will support you every step of the way.

Death from an asbestos-related condition is usually due to inhaling asbestos fibres. Several types of health issues can arise, such as asbestos-related lung cancer. After a diagnosis, death sadly often happens within a matter of months. In most cases, an asbestos claim after death is made on behalf of the deceased’s family members by solicitors acting on their behalf through the courts.

How Can I Claim For Asbestos Compensation?

At R James Hutcheon Solicitors, we have over 30 years of experience dealing with asbestos-related compensation claims. We have produced a video of the 5 most common questions, which you can watch below.

There are three main causes of death in the United Kingdom following asbestos exposure, including:

When Can You Claim for Asbestos Compensation?

An asbestos compensation claim can be made when someone has contracted an asbestos-related disease after being exposed to asbestos. Claims are often made when the person was exposed while working.

If the person is still alive, they will be able to make a claim themselves. They will have to present evidence showing how and when they were exposed to the dangerous minerals.

If the person is no longer alive and has had a diagnosis for an asbestos-related condition, a family member will be able to make an asbestos after death claim on their behalf.

How Is Compensation for Asbestos Decided?

In the UK, the courts will consider several factors when deciding on a compensation payout for asbestos-related diseases. Each case is decided based on its unique facts, but the following points are common considerations. 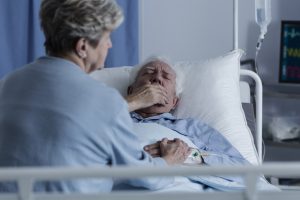 What Are the Average Compensation Payouts for Asbestos Claims After Death in the UK?

The above figures are for general guidance. In addition to the above asbestos compensation claims payouts, there are other heads of damages that expert asbestos solicitors can claim on behalf of the victim and their family.

What Are Some Real Payout Examples by the Courts?

Below is a selection of real compensation payouts for asbestos claims after death as decided by UK Courts.

A case was decided in the Manchester County Court.  The asbestos victim was diagnosed with malignant mesothelioma of the pleura. A claim was brought against her former employer for damages for personal injury, alleging that she had contracted the illness due to asbestos exposure during the course of employment.

The claimant was aged 58 when she developed malignant mesothelioma of the pleura. She began suffering from symptoms of mesothelioma in May 2012 with shortness of breath and lethargy and was diagnosed in August. The prognosis was poor.

The total award for the asbestos compensation after death: £135,000


The employee contracted mesothelioma, due to exposure to asbestos at work. He was diagnosed in February 2011 by the presence of a large right pleural effusion and pleural plaques, from exposure to asbestos during his employment. He had a life expectancy of six months, with a likely range of three to nine months, from September 2012.

The employee claimed damages for mesothelioma, which he alleged was caused by negligent exposure to asbestos in the course of his employment by the defendant. Between 1961/1962 and 1981, the claimant was employed and responsible for the supervision of the packing, removal and installation of industrial plant and equipment. In 2011, the claimant was diagnosed with mesothelioma.

The claimant’s evidence was that while employed by the defendant, he had been exposed to asbestos dust from the dismantling of pipework from factory equipment.

At court, his health had deteriorated and towards the end of the one-hour questioning, he required morphine as pain control. From time to time he lost concentration. Under cross-examination, some of the claimant’s answers to questions suggested that exposure to asbestos during the relevant period of time could not be demonstrated.

Whilst the defendant submitted to the court that his evidence was unreliable, the Judge dismissed the claims and found in, fact, he was a reliable witness and established to the satisfaction of the court relevant exposure levels and working environment to prove a case. He was truthful and a careful witness and therefore liability was proven against his employers.

Asbestos compensation after death was agreed between the solicitors at £168,000.

The Deceased first experienced symptoms in July 2007 he sadly died in April 2011, shortly after being diagnosed in March 2011. The Deceased contracted mesothelioma as a result of ‘secondary’ exposure. The Deceased washed her husband and son’s overalls, which were covered in asbestos dust and fibres because of their work at the Aberthaw Power Station. Proceedings were issued and the matter settled.

The case was ‘Fast Tracked’ due to her condition under the mesothelioma scheme. Her family were awarded compensation in the sum of £113,000.

The Employee’s symptoms began in January 2011. At the time of the Trial, he was dying of mesothelioma as a result of exposure to asbestos with a life expectancy of 2 to 6 months. He was 65 years old at the time when at court. He was only in his teenage working years when he was exposed to the deadly dust fibres.

The judge found that under Regulation 1 of the Asbestos Industry Regulations 1931 and section 29 (1) of the Factories Act 1961 imposed a duty upon the Defendant as the occupier. The Defendant company did not come up with any evidence to suggest they supplied their employee with effective breathing apparatus and effective mechanical ventilation, so as not to expose the Claimant to asbestos.

As the defendant failed to provide this evidence, Judgment was entered and the case settled in the sum of £205,000, with £80,000 allowed for general damages (that is for the asbestos-related condition alone, pain and suffering). The additional about of £125,000 was paid in accordance with the Fatal Accidents Act 1976, for the dependents of the deceased.

Malignant mesothelioma of the pleura was diagnosed.

The employee was alive when the case came to court. Often quite unusual for a mesothelioma case, as often the victim of asbestos exposure has sadly died.

Between 1967 and 1985 the claimant was exposed to asbestos dust in the course of his employment with the National Coal Board. He started to experience chest symptoms in January 2011. His condition deteriorated and he was diagnosed as suffering from malignant mesothelioma in March 2011.

In September 2011 the claimant’s estimated life expectancy as a result of the malignant mesothelioma was between one to five months.
Facts

In April 2011 a left thoracoscopy was performed to remove the pleural effusion and to relieve the claimant’s breathlessness.

The prognosis was for inevitable deterioration probably with worsening pain, increasing breathlessness, loss of appetite and weight and progressive debility.

It was likely the claimant would become completely incapacitated and in need of constant nursing care towards the end of his life.

Had it not been for the mesothelioma his life expectancy would have been 2.9 years.

Damages for pain suffering and loss of amenity were awarded at £50,000.

Can I Get Compensation for Asbestos Claims After Death?

Compensation payouts for death following the inhalation of asbestos dust at work is very much after the event symptoms of the disease has a very long latent period, often over 30 years from first being exposed to the deadly dust.

Often, most asbestos victim suffers who seek legal advice are in their 60’s and 70’s. They are concerned for their loved ones as they are usually a carer for their partner who needs support.

No amount of compensation will ever replace the tragic loss, but it will provide some financial support, help pay for bills and expenses and even care for loved ones left behind.

There will also be a sense of justice that someone has paid for the hurt, pain and suffering that has been endured before death.

As specialist asbestos claims after death solicitors, we will consider all claims sympathetically and expertly. In fact, all asbestos-related claims will be considered.

Please contact us now to discuss a possible claim but remember there is a limited period to make a claim which is three years from the date of death or within three years from when the worker who was exposed to the dust knew that it was related to his/her workplace.

Can I Claim Asbestos Compensation for Family Members UK?

Have you recently lost a family member due to an asbestos-related disease? If your answer is, unfortunately, yes, we know how difficult life may be for you right now. You shouldn’t have to suffer in silence or feel hopeless. You may be able to pursue a claim on behalf of your deceased relative.

As most asbestos exposure occurs in workplaces, the first step to making a claim for a loved one is to piece together their employment history. Solicitors will work closely with the family members to track down the relative’s previous employers and pinpoint where exposure to asbestos took place. Compensation can still be pursued even if the employer is no longer operating. Evidence will be collected, including witness statements, to determine how asbestos exposure occurred and whether anyone else has also suffered as a result.

To make a UK asbestos compensation claim on behalf of a family member, please get in touch with us today.

Can I Make an Asbestos Claim As a Dependent?

If you are considered a dependent of the deceased, then this means that you relied heavily on the person before they died. You may have depended on the deceased for financial assistance or support services, such as childcare. Dependents often include partners, children, parents and siblings, but this isn’t an exhaustive list.

If making an asbestos claim as a dependent, your entitlement will be based on factors relating to the death. A person dying following asbestos-related exposure can cause their loved ones to suffer financially or through other loss of dependency. If this fits your situation, we highly recommend that you discuss the case with an experienced solicitor. Dependency claims are there to help loved ones recover from loss services and financial loss.

Please view our dedicated dependency claims page to learn more about making an asbestos claim as a dependent.

Making an Asbestos Claim After Death for Families

We hope this guide has helped you understand what asbestos-related conditions exist and how a victim or loved one can claim compensation damages. If you want to know more or wish to proceed with a claim, please feel free to contact us by clicking the following button. We look forward to hearing from you.